Czech painter and graphic artist, active mainly in France, a pioneer of abstract art. He was born in Opocno in eastern bohemia and studied at the Academies of Prague (1889-92) and Vienna (1892-93). At this time he was painting historical scenes in a traditional style. In 1895 or 1896 he moved to Paris, which was to be his home for the rest of his life. …In his early days in Paris he worked mainly as a book illustrator and satirical draughtsman; his paintings were influenced by Symbolism and the Fauvism. From an early age he had been interested in the supernatural (later in Theosophy), and from this grew a concern with the spiritual symbolism of colour. It became his ambition to create paintings whose colours and rhythms would produce effects similar to those of music, and in his letters he sometimes signed himself ‘colour symphonist’. (1)

From 1909 (inspired by high speed photography) he experimented—in a manner similar to that of the Futurists—with ways of showing motion, and by 1912 this led him to complete abstraction in Amorpha: Fugue in Two Colours (National Gallery, Prague). This created something of a sensation when it was exhibited at the Salon d’Automne that year. As with Delaunay and the Orphists, to whom his work was closely related, Kupka excelled at this stage in his career in the creation of lyrical colour effects. (2)

In the summer of 1908 Kupka painted his stepdaughter Andrée playing with a red and blue ball on the lawn of his garden in Puteaux. (3) 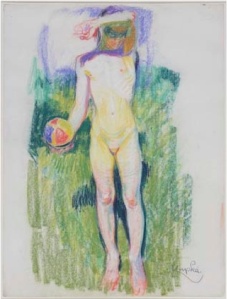 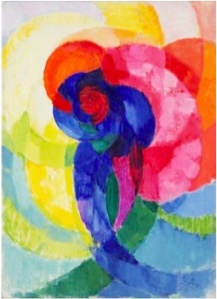 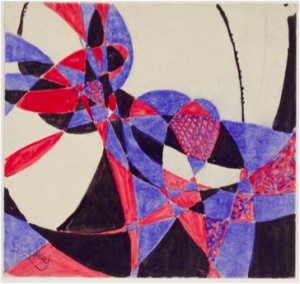 At the outbreak of the First World War Kupka volunteered for military service and fought on the Somme; he also did a good deal of work such as designing posters and was discharged with the rank of captain in 1919. In 1922 he lectured at the Prague academy, which appointed him a professor in Paris with the brief of introducing Czech students there to French culture. Before the war Kupka had written a theoretical text in French, La Création dans les arts plastiques, and in 1923 this was published in Prague. The English translation: Creativity in the Visual Arts. In 1931 he was one of the founder members of the Abstraction- Création group, but he resigned in 1934. His later work was in a more geometrical abstract style. Although Kupka gradually established a considerable reputation, his pioneering role in abstract art was not generally realized in his lifetime. The re-evaluation of his career began with an exhibition of his work at the Musée National d’Art Moderne, Paris, in 1958, a year after his death. (4)